Bee Children will Perform for the Benefit of

The members of Bee Children are involved in a number of organizations that work for the benefit of society and they have generously donated their time, thought, organizational skills, and their music to support them. Their last performance here was in benefit of two local organizations: Renewal House and the Potsdam Food Pantry. This time they are performing in support a cause farther afield: The Ugandan Water Project Partners and Legal and Charitable Aid Uganda

Bee Children channel the do-it-yourself attitude of the 1960s and the indie spirit of the 1980s into original music that is impassioned, cerebral, and atmospheric. Created as an acoustic folk-pop project, the band’s sound has evolved over the past half-decade into a more ambitious, electric mix that showcases their post-punk, new wave, synth-pop and college radio influences. Words of hope, melancholia, and empowerment combine with complex soundscapes that alternate between light and dark, past and present. The band released its debut album, Veranophonic, in 2015, and followed it up with 2018’s Gather the Exiles, a collection of nine songs headlined by the propulsive, inspiring “Get Free.” The video for the song was filmed live at the legendary Java Barn.  The band has played in a range of venues from intimate acoustic spaces and local bars to music hot spots and regional concert series and festivals. 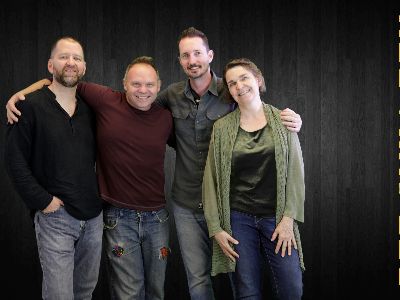 This concert is open to the public. Admission is free but monetary donations will be accepted and will go to the Ugandan Water Project Partners and Legal and Charitable Aid Uganda. Come on out to help us celebrate and support these great causes!

For directions, go to https://robinmcclellan.com/ where you’ll find a link.