At The Hermitage
(Robin McClellan’s)
in Sanfordville.

Unfortunately, Mary Ann has come down with double pneumonia and won’t be able to make it. Mark will be here and I hope you’ll come out for his debut at the Hermitage!

Mary Ann approached me about doing this concert with Mark Lyon last year to help him get some exposure to the local music scene. I didn’t have to hear or meet Mark to agree, I know I can trust Mary Ann’s judgment in this regard, but looking over his bio (below) I’m more excited than ever about this concert! This is a new pairing of musicians and they are still working out the performance; I can only tell you that they will play individually and together and, if past performance is any gauge, delight us.

Mark and Mary Ann are going to donate 50% of the proceeds to Tedra Cobb’s campaign for the 21st Congressional Race. I have known Tedra for many years and worked with her on energy, environment, and social issues in the region. She combines a passion for the region and those of us who live in it with the ability to work with people of all stripes to craft policies that are effective and fair. This is something sorely needed in these divisive times. For more information on Tedra go to her web page or her Facebook page.

The suggested donation is $10 and reservations are not required. 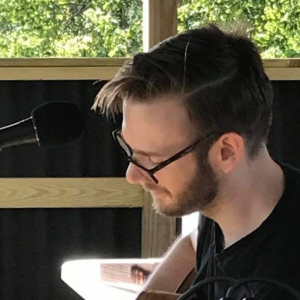 Mark draws from folk, blues, country, and bluegrass and is guided by nature and ethereal influences. He teaches guitar with the Musical Way Academy. Mary Ann says, “He is a very very very VERY good guitar player. He is very engaging with the audience and his easy way is something that you don’t find too often. He plays to play, not to perform.”

He is also interested in the use of music in the healing arts and has been accompanying Becky Harblin during Tibetan Singing Bowl Sound Baths. “It is my goal to make people feel when they listen to my music,” said Mark. In addition to playing, he built his own guitar in local luthier, Tracy Cox’s shop.

Mark is in the process of recording his first album. I’m hoping that his appearance here will help grow his dedicated following!

Mary Ann has had a busy year of touring both as a duo with Tas Cru and a member of his Band of Tortured Souls. With over 60 performances from the famous Rum Boogie Café on Beal Street in Memphis to a summer filled with festivals throughout the northeast and Canada, this has been a year of travel. She has also logged in hours recording full backup vocals for 2 of Tas’ albums at Subcat Studios in Syracuse. Her Sammy Award (Syracuse Area Music Award) nominated album, Restless Heart has gotten a good amount of national and international airplay.

2018 will be starting off busy as she sets out to join the band mid-tour with a lineup of 7 shows in Topeka, Kansas, and Memphis in mid-January. This tour has also earned her a spot on the acclaimed Women in Blues Showcase Stage in Memphis. Mid-March starts a round of gigs around NY State and radio performances which include a stop at McGeary’s in Albany and Caffe Lena in Saratoga. More performances and tours are pending. While local performances are few and far between, she calls the North Country of NY State her home and still finds great joy in performing in this area. Feb. 24 starts performance on her 3rd album…soon to be named. All of the music is written and she is in the process of lining up musicians to perform on this new venture.

In other news, Tas Cru, a frequent performer here with Mary Ann, had his album Simmered and Stewed nominated for a Blues Music Award. This is, indeed, a high honor. Congratulations, Tas!

One response to “Mark Lyon”